Depressed ENTJ - how do we cope with depression? 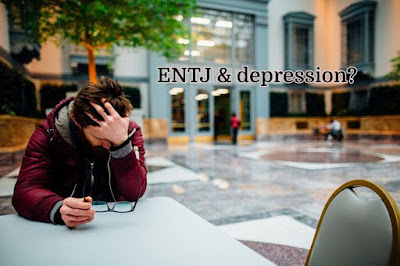 Most ENTJ descriptions are written in such a way that you can't imagine a person like that ever having problems with depression. An assertive, logical, quick-minded leader having depression? No way. But clearly, it CAN happen to every human and ENTJs are no exception. Not every ENTJ is born into opportunity and wealth, not every ENTJ is born into health either. Having great aspirations while being born into poverty, bad health or disability for example, can be a huge burden on your psyche.

How does depression manifest in an ENTJ?

Since maintaining an image of a strong person is important to them they may hide it well or even be in denial about it to themselves. Men especially are known for hiding such feelings and projecting an image of strength to the outside world. Their apartment may become a mess, they may develop a nasty drinking habit, but when they go outside they will dress nicely and pretend they have their sh*t together.

Sometimes ENTJs themselves are not aware that they have depression because they develop a habit of ignoring their feelings and just working until burnout. It usually takes a long time for an ENTJ to realize they are depressed. Extroverts get a buzz from hanging out with people, so a weekend spent socializing can feel like you are out of a depression, but if the feelings of emptiness come back and stick around for 5 days a week, you are probably depressed.

ENTJs, in a national sample, along with ESTJs, ranked second highest in mean level of coping resources, so they have strategies to endure stress and hardship for a long time, but it takes a toll if ignored. For ENTJs depression is usually not wallowing in self-pity, crying, self-injury or any of that emotional drama, but just a feeling of emptyness, like an engine that has run out of fuel.

Here are some quick notes to summarize depression in ENTJs:

ENTJs according to studies in the MBTI manual cope with stress and emotional adversity usually through healthy ways like exercising or "thinking of options", but statistics also show that young ENTJ males are overrepresented among students referred for a substance abuse workshop.

Most ENTJs adhere to a stoic philosophy of life. They will endure anything as long as they can picture a better future. But sometimes waiting and enduring is not enough. Sometimes you are so deep in misery and so stuck that only a professional can help, so don't hesitate to go to a psychiatrist.

October 15, 2020
ENTJ women are logical, analytical, assertive, non-conformist, independent and sometimes brutally honest and if you think those traits are unusual for a woman, first of all you have prejudice, but also you're in for more surprises, because the ENTJ female is also statistically an unusual occurence. ENTJ women are the second most rare type, representing only 0.9% of all women, right after INTJ women who represent only 0.8% of the female population. ENTJ women, just like ENTJ men, highly value family and friends, so they are likely to be loyal. Their loyalty is not endless and uncoditional though and they have no problem cutting people out of their life if trust is repeatedly broken. How do I spot an ENTJ female? Well, apart from the description above, you might notice an ENTJ woman in male dominated professions like business or politics. A very large percentage of women in those two professions are either ENTJ or ESTJ. ENTJ women tend to dress elegantly but practically. In schoo
Read more